When I moved from California to Korea a decade ago, I experienced many layers of culture shock. It began with the language barrier, and continued with missing many everyday conveniences that I had always taken for granted. Shopping was just one of those. I had already traveled extensively, mainly in Europe, and thought I knew a thing or two about bargain hunting, haggling, and sussing out unusual and coveted items in obscure places. Also, being from the States, I was used to buying whatever I needed, whenever I wanted, without too much searching.

I had my work cut out for me, shopping-wise, in Korea. For one, there was a limited availability of many Western goods I’d come to depend on, and when I found them, they were expensive.

My solution was – and still is, in some cases – to order items from the Internet, or stockpile a bunch of favorites in my suitcase on my trips back across the pond.

As someone used to a calm, quiet shopping experience, predictable selection, and salespeople who give shoppers their space, I was baffled by the Korean shopping culture. However, I started looking at things a bit differently when I discovered the charm of Korean traditional markets, known as “sijang” (시장). The best market in my area is Seomun Sijang, in Daegu.

Major cities in Korea often have several sijang, and the best ones are a veritable wonderland of items, including produce, meats, fish, bread, clothing, textiles, traditional medicinal items, souvenirs, and plants, for example. There are usually permanent restaurants, pop-up restaurants, food stalls, and cafes in the area. Seomun Sijang has all of the aforementioned and more, being that it’s one of the biggest and oldest markets in Korea.

Since Daegu is traditionally Korea’s textile manufacturing center, Seomun has an impressive array of fabrics for sale, as well as notions, yarn, craft items, handmade traditional clothing, supplies for tailors, and actual garment-makers and tailors on-site. These features alone make Seomun Sijang a go-to destination when I need to load up on yet more supplies for my creative obsessions. Two things I absolutely must seek out when I’m there: craft supplies, and food. Not necessarily in that order.

Korean traditional markets have in spades all the features that usually bother me about shopping – the crowds and chaotic ambiance, the overbearing hawkers, and a tendency to neglect the “finer aspects” of presenting merchandise to its full advantage. Items for sale may be piled haphazardly in shop windows or stalls, without regard to aesthetic appeal or even neatness, and it’s up to the shopper to sift through them, under the watchful eye and ready advice of the merchant.

Yet somehow, I love it. I go with certain things in mind, and like a prospector, I pitch into the shopping wilds with my sensible walking shoes and a hopeful resilience. One never knows what one may encounter, just beyond the stacks of mismatched monogram towels, piles of fruits, nuts, snacks, kimchi, and bolts of cheerful calico fabric.

I often go to the sijang for exactly the above-mentioned items. They’re usually the best quality and most reasonably priced anywhere in the city. What the sijang may lack in highbrow sophistication, it delivers in a fascinating cultural richness, reliability, value, and the more-than-occasional surprise.

When it comes to food, I never get bored. My habit is to try to find three favorite snacks from the abundant street food offerings, and eat while I’m shopping. The first is hoeddeok, shown in the photo at top. It’s a pillow-soft fritter stuffed with cinnamon, sugar, and sunflower seeds. I wash it down with a refreshing grapefruit-ade, made to order. Then, I look for a bag of candied ginger to bring home with me, as an accompaniment to tea. The ginger is a good alternative to candy, and has an addictive spiciness. In fall and winter, three more of my favorite seasonal snacks are available, all roasted to perfection: chestnuts, gargantuan sweet potatoes, and sweet corn.

One unusual street food item is bondegi (번데기), or silkworm pupa that has been boiled or steamed, and is usually eaten from a small cup with a toothpick. Yes, I’ve tried it, more than once! Bondegi has a chewy texture, and the flavor brings to mind the paste I used to work with for my first grade art projects. Which could be tasty, depending upon preference.

There is a smaller sijang near my home, and I go there more often because it’s convenient. The craft selection isn’t available, but there are still loads of food choices and several used clothing shops I like to visit when I have time.

Thanks for taking a tour of my sijang adventures with me. I absolutely love an afternoon of poking around a Korean traditional market, with all the character, variety, and culinary yumminess it has to offer. In a future post, I’ll show you how I’ll use the pretty lanyard beads I found in Seomun. See you again soon! 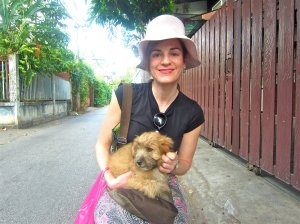 I’m Pam, an American living in South Korea. Among the hats I wear are artist, teacher, learner, traveler, dog mom, auntie. I’m interested in way too many things. Welcome to my craft diary!

Find me on Social: